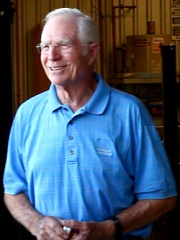 Jim Hall (born July 23, 1935 in Abilene, Texas) is a retired American racing driver, race car constructor, and team owner. While he is best known as a car constructor, he was one of the greatest American racing drivers of his generation, capturing consecutive United States Road Racing Championships (1964, 1965), two Road America 500s (1962, 1964), two Watkins Glen Grands Prix for sports cars (1964, 1965), the 1965 Canadian Grand Prix for sports cars, the 1965 Pacific Northwest Grand Prix, and scoring a massive upset at the 1965 12 Hours of Sebring over a contingent of factory-backed Ford GTs, Shelby Daytona Coupes and Ferrari entries. If anything Hall's accomplishments behind the wheel have been overshadowed by his pivotal contributions to race car design through his series of Chaparral sports racing and Indy cars. Read more on Wikipedia

Among RACING DRIVERS In United States