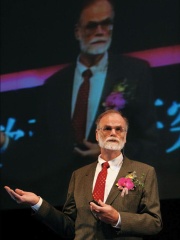 James Nicholas Gray (1944 – declared dead in absentia 2012) was an American computer scientist who received the Turing Award in 1998 "for seminal contributions to database and transaction processing research and technical leadership in system implementation". Read more on Wikipedia

Since 2007, the English Wikipedia page of Jim Gray has received more than 12,985 page views. His biography is available in 29 different languages on Wikipedia making him the 10,236th most popular politician.

Among politicians, Jim Gray ranks 10,184 out of 14,801. Before him are Niels Neergaard, Hubertine Auclert, Matthew Hopkins, Manuel A. Odría, Adalbert I, Count of Vermandois, and Louis Buffet. After him are Lucius Aemilius Barbula, Vitold Fokin, Gebhard, Duke of Lorraine, Víctor Balaguer i Cirera, Charles Helou, and Henry Casimir I of Nassau-Dietz.