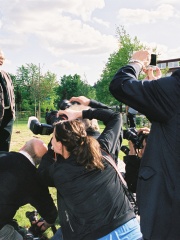 Jim Dine (born June 16, 1935 in Cincinnati, Ohio) is an American artist whose œuvre extends over sixty years. Dine’s work includes painting, drawing, printmaking (in many forms including lithographs, etchings, gravure, intaglio, woodcuts, letterpress and linocuts), sculpture and photography; his early works encompassed assemblage and happenings, while in recent years his poetry output, both in publications and readings, has increased.Dine has been associated with numerous art movements throughout his career including Neo-Dada (use of collage and found objects), Abstract Expressionism (the gestural nature of his painting), and Pop Art (affixing everyday objects including tools, rope, articles of clothing and even a bathroom sink) to his canvases, yet he has actively avoided such classifications. At the core of his art, regardless of the medium of the specific work, lies an intense process of autobiographical reflection, a relentless exploration and criticism of the self through a number of highly personal motifs which include: the heart, the bathrobe, tools, antique sculpture, and the character of Pinocchio (among flora, skulls, birds and figurative self-portraits). Read more on Wikipedia

Among PAINTERS In United States