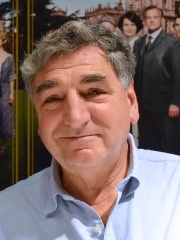 James Edward Carter, (born 19 August 1948) is an English film and television actor. He is best known for his role in Downton Abbey (2010–2015) playing Mr Carson, a role that has earned him four nominations for the Primetime Emmy Award for Outstanding Supporting Actor in a Drama Series (2012–2015). Read more on Wikipedia

Since 2007, the English Wikipedia page of Jim Carter has received more than 22,247 page views. His biography is available in 18 different languages on Wikipedia making him the 2,407th most popular actor.