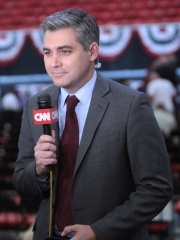 Abilio James Acosta (born April 17, 1971) is an American broadcast journalist, anchor and the chief domestic correspondent for CNN. Previously, Acosta served as the network's chief White House correspondent during the Trump administration, in which he gained national attention for President Donald Trump's clashes with him at press briefings. Read more on Wikipedia

Since 2007, the English Wikipedia page of Jim Acosta has received more than 2,819,295 page views. His biography is available in 16 different languages on Wikipedia. Jim Acosta is the 141st most popular journalist, the 17,203rd most popular biography from United States and the 38th most popular Journalist.

Among journalists, Jim Acosta ranks 141 out of 127. Before him are Arnab Goswami, Lauren Booth, Mohammed Nabbous, A. O. Scott, Danish Siddiqui, and Nate Silver. After him are Steven Crowder, Lauren Southern, Peter Travers, and Halyna Hutchins.