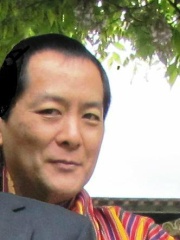 Jigme Singye Wangchuck, འཇིགས་མེད་སེང་གེ་དབང་ཕྱུག་, (born 11 November 1955) is the former king of Bhutan (Druk Gyalpo) from 1972 until his abdication in favor of his eldest son, Jigme Khesar Namgyel Wangchuck, in 2006. During his reign, he advocated the use of a Gross National Happiness index to measure the well-being of citizens rather than the Gross Domestic Product. Read more on Wikipedia

Since 2007, the English Wikipedia page of Jigme Singye Wangchuck has received more than 681,379 page views. His biography is available in 49 different languages on Wikipedia making him the 6,366th most popular politician.

Among politicians, Jigme Singye Wangchuck ranks 6,333 out of 14,801. Before him are Al-Mansur Billah, Hortense Mancini, Jigme Dorji Wangchuck, Janez Janša, Warren Hastings, and Amadeus II, Count of Savoy. After him are Sekhemre-Wepmaat Intef, Phillipe de Plessis, Svein Knutsson, Tsutomu Hata, Osorkon the Elder, and Margaret I, Countess of Flanders.

Others born in Bhutan