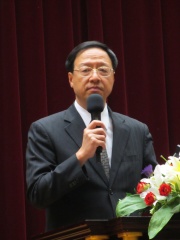 Jiang Yi-huah (traditional Chinese: 江宜樺; simplified Chinese: 江宜桦; pinyin: Jiāng Yíhuà; born 18 November 1960) is a Taiwanese politician and former Premier of the Republic of China (ROC). On 29 November 2014, he tendered his resignation and was succeeded by Mao Chi-kuo on 8 December 2014.Prior to his appointment as the Premier, Jiang was the Vice Premier of the Republic of China from 2012 to 2013. Read more on Wikipedia

Since 2007, the English Wikipedia page of Jiang Yi-huah has received more than 34,304 page views. His biography is available in 15 different languages on Wikipedia making him the 13,818th most popular politician.