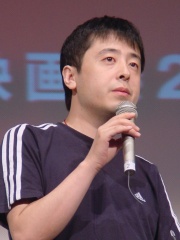 Jia Zhangke (born 24 May 1970) is a Chinese film director and screenwriter. He is generally regarded as a leading figure of the "Sixth Generation" movement of Chinese cinema, a group that also includes such figures as Wang Xiaoshuai, Lou Ye, Wang Quan'an and Zhang Yuan.Jia's early films, a loose trilogy based in his home province of Shanxi, were made outside of China's state-run film bureaucracy, and therefore are considered "underground" films. Read more on Wikipedia

Since 2007, the English Wikipedia page of Jia Zhangke has received more than 364,581 page views. His biography is available in 20 different languages on Wikipedia making him the 880th most popular film director.

Among FILM DIRECTORS In China