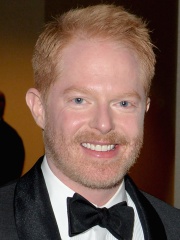 Jesse Tyler Ferguson (born October 22, 1975) is an American actor. He is best known for portraying Mitchell Pritchett on the sitcom Modern Family (2009–2020), which earned him five consecutive Primetime Emmy Award nominations for Outstanding Supporting Actor in a Comedy Series and four Screen Actors Guild Awards for Outstanding Performance by an Ensemble in a Comedy Series. Ferguson made his Broadway debut in The 25th Annual Putnam County Spelling Bee, for which he and his ensemble cast won a Drama Desk Award for Outstanding Cast Ensemble. Read more on Wikipedia

Since 2007, the English Wikipedia page of Jesse Tyler Ferguson has received more than 3,454,434 page views. His biography is available in 27 different languages on Wikipedia making him the 4,602nd most popular actor.