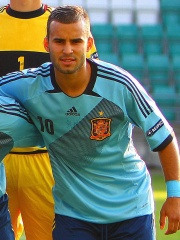 Jesé Rodríguez Ruiz (Spanish pronunciation: [xeˈse roˈðɾiɣeθ ˈrwiθ]; born 26 February 1993), known as Jesé, is a Spanish professional footballer who plays as a forward for Segunda División club Las Palmas. An academy graduate of La Liga side Real Madrid, Jesé debuted for the senior team in 2011, making 94 appearances across all competitions for the club and scoring eighteen goals. During his time in Madrid, which was disrupted by a serious knee injury in 2014, he won two Champions League medals, as well as a title in each of La Liga, the FIFA Club World Cup and the Copa del Rey. Read more on Wikipedia

Page views of Jesé by language

Among people born in 1993, Jesé ranks 45. Before him are Niall Horan, Alphonse Areola, Fabinho, Victoria Justice, Garbiñe Muguruza, and Miranda Cosgrove. After him are Suso, George Ezra, Raphaël Guerreiro, Debby Ryan, Will Poulter, and AnnaSophia Robb.