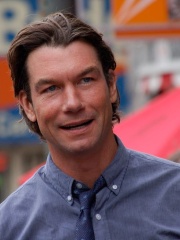 Jeremiah O'Connell (born February 17, 1974) is an American actor, director and talk show host, known for his roles as Quinn Mallory in the television series Sliders, Andrew Clements in My Secret Identity, Vern Tessio in the film Stand by Me (1986), Joe in Joe's Apartment (1996), Frank Cushman in Jerry Maguire (1996), Derek in Scream 2 (1997), Charlie Carbone in Kangaroo Jack (2003), and Detective Woody Hoyt on the drama Crossing Jordan. He starred as Pete Kaczmarek in the single 2010–2011 season of The Defenders. He also had a starring role in the comedy horror film Piranha 3D (2010). Read more on Wikipedia

Since 2007, the English Wikipedia page of Jerry O'Connell has received more than 6,463,373 page views. His biography is available in 32 different languages on Wikipedia making him the 4,161st most popular actor.

Among actors, Jerry O'Connell ranks 4,107 out of 8,832. Before him are Roy Kinnear, Polly Bergen, Saoirse Ronan, Cardi B, Victor Varconi, and Gertrude Lawrence. After him are Corey Feldman, Shawn Weatherly, Margaret Avery, Anica Dobra, John McIntire, and James MacArthur.