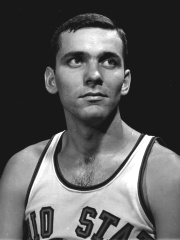 Jerry Ray Lucas (born March 30, 1940) is an American former basketball player. He was a nationally awarded high school player, national college star at Ohio State, and 1960 gold medal Olympian and international player before later starring as a professional player in the National Basketball Association (NBA). As a collegian, Lucas led the Ohio State Buckeyes to three straight NCAA finals (1960-1962), winning the national championship in 1960, and finishing as runner-up in 1961 and 1962. Read more on Wikipedia

Since 2007, the English Wikipedia page of Jerry Lucas has received more than 514,521 page views. His biography is available in 32 different languages on Wikipedia making him the 70th most popular basketball player.