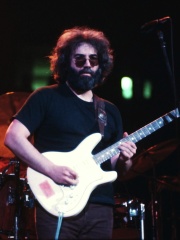 Jerome John Garcia (August 1, 1942 – August 9, 1995) was an American guitarist, singer and songwriter, best known for being a principal songwriter, the lead guitarist and a vocalist with the rock band the Grateful Dead, of which he was a founding member and which came to prominence during the counterculture of the 1960s. Although he disavowed the role, Garcia was viewed by many as the leader of the band.As one of its founders, Garcia performed with the Grateful Dead for their entire 30-year career (1965–1995). Garcia also founded and participated in a variety of side projects, including the Saunders–Garcia Band (with longtime friend Merl Saunders), the Jerry Garcia Band, Old & In the Way, the Garcia/Grisman and Garcia/Kahn acoustic duos, Legion of Mary, and New Riders of the Purple Sage (which he co-founded with John Dawson and David Nelson). Read more on Wikipedia