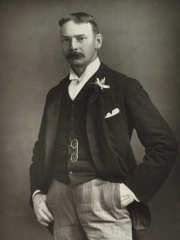 Jerome Klapka Jerome (2 May 1859 – 14 June 1927) was an English writer and humourist, best known for the comic travelogue Three Men in a Boat (1889). Other works include the essay collections Idle Thoughts of an Idle Fellow (1886) and Second Thoughts of an Idle Fellow; Three Men on the Bummel, a sequel to Three Men in a Boat; and several other novels. Jerome was born in Walsall, England, and, although he was able to attend grammar school, his family suffered from poverty at times, as did he as a young man trying to earn a living in various occupations. Read more on Wikipedia

Among writers, Jerome K. Jerome ranks 1,036 out of 5,755. Before him are Johannes Valentinus Andreae, Ernst Toller, Ľudovít Štúr, Egill Skallagrímsson, Shoko Asahara, and Bāṇabhaṭṭa. After him are Marcus Minucius Felix, John Malalas, Will Durant, Corinna, Robert Merle, and Al-Mutanabbi.