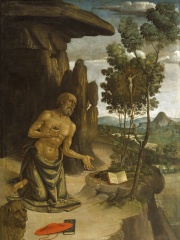 Jerome (; Latin: Eusebius Sophronius Hieronymus; Greek: Εὐσέβιος Σωφρόνιος Ἱερώνυμος; c. 342 – c. 347 – 30 September 420), also known as Jerome of Stridon, was a Christian priest, confessor, theologian, and historian; he is commonly known as Saint Jerome. Jerome was born at Stridon, a village near Emona on the border of Dalmatia and Pannonia. He is best known for his translation of the Bible into Latin (the translation that became known as the Vulgate) and his commentaries on the whole Bible. Read more on Wikipedia

Since 2007, the English Wikipedia page of Jerome has received more than 2,824,684 page views. His biography is available in 81 different languages on Wikipedia (up from 79 in 2019). Jerome is the 52nd most popular religious figure (up from 53rd in 2019), the 2nd most popular biography from Serbia and the most popular Serbian Religious Figure.

Jerome was a Christian saint who is most famous for translating the Bible from Hebrew and Greek into Latin.

Page views of Jeromes by language

Among religious figures, Jerome ranks 52 out of 2,238. Before him are 14th Dalai Lama, Mary Magdalene, Pope Gregory I, Job, Pope Pius XII, and Bartholomew the Apostle. After him are Anthony the Great, Anthony of Padua, Pope Clement VII, Luke the Evangelist, Benedict of Nursia, and Abu Hanifa.

Among RELIGIOUS FIGURES In Serbia