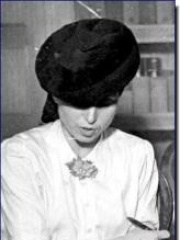 Jenny-Wanda Barkmann (30 May 1922 – 4 July 1946) was a German guard in Nazi concentration camps during World War II. She is believed to have spent her childhood in Hamburg. In 1944, she became an Aufseherin in the Stutthof SK-III women's camp, where she brutalized prisoners, some to death. She also selected women and children for the gas chambers. Read more on Wikipedia

Since 2007, the English Wikipedia page of Jenny-Wanda Barkmann has received more than 350,544 page views. Her biography is available in 16 different languages on Wikipedia making her the 25th most popular mafioso.