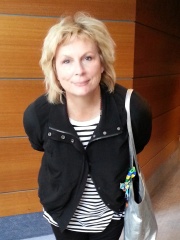 Jennifer Jane Saunders (born 6 July 1958) is an English comedian, screenwriter, singer and actress. Saunders originally found attention in the 1980s when she became a member of The Comic Strip after graduating from the Royal Central School of Speech and Drama with her best friend and comedy partner, Dawn French. With French, she co-wrote and starred in their eponymous sketch show, French and Saunders, for which they jointly received a BAFTA Fellowship in 2009. Read more on Wikipedia

Since 2007, the English Wikipedia page of Jennifer Saunders has received more than 3,664,877 page views. Her biography is available in 35 different languages on Wikipedia making her the 4,304th most popular actor.