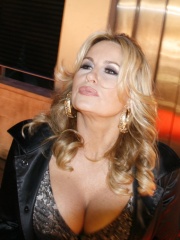 Jennifer Audrey Coolidge (born August 28, 1961) is an American actress and comedian. She is best known for her roles as Jeanine "Stifler's Mom" Stifler in the American Pie film series (1999–2012) and as Paulette Bonafonté Parcelle in the Legally Blonde film series (2001–2003). Read more on Wikipedia

CNN
Jennifer Coolidge says playing Stifler's mom in 'American Pie' helped her sex life
Jennifer Coolidge says her memorable role in raunchy teen comedy "American Pie" came with benefits -- and she's not talking about her residual checks.
Marianne Garvey
HuffPost
Jennifer Coolidge Says 1 Role Helped Her Sleep With ‘Like 200 People’
“There was so many benefits to doing that movie,” Coolidge said about all the “sexual action” she got.
Elyse Wanshel
Thechive.com
Jennifer Coolidge says MILF role led to her sleeping with 200+ people (5 GIFs)
Jennifer Coolidge continues to be iconic. It doesn’t matter what you know her from, but you 100% know her. However, for most people, Coolidge is known for her famous role in American Pie. And it seems like that’s Coolidge’s favorite role for one particular re…
Camry
Deadline
New 20 Questions On Deadline Podcast: Jennifer Coolidge Reveals Her ‘White Lotus’ Season 3 Dream & The Real ‘Bend And Snap’ Technique
Welcome to 20 Questions on Deadline, our new interview podcast with a twist. Every week I’ll be asking onscreen stars a set of quirky questions designed to dig into their best advice, biggest fears and fondest memories. For this first episode, I sat down with…
Antonia Blyth