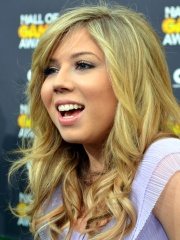 Jennette Michelle Faye McCurdy (born June 26, 1992) is an American singer-songwriter, filmmaker, podcaster, and former actress. McCurdy had her breakthrough playing Sam Puckett in the Nickelodeon sitcom iCarly (2007–2012), a role that won her four Kids' Choice Awards, among other accolades. She reprised the character in its spin-off series Sam & Cat (2013–2014), after which she exited the network. Read more on Wikipedia

Among actors, Jennette McCurdy ranks 5,636 out of 10,030. Before her are Irving Pichel, Scott Wolf, Richard Denning, Mike Mazurki, Hilarie Burton, and Richard Dix. After her are John Bunny, James Tupper, May Allison, Mary Boland, Michał Żebrowski, and Jun Fukuyama.