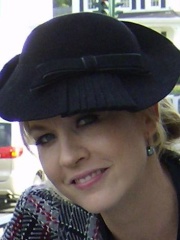 Jennifer Mary "Jenna" Elfman (née Butala; born September 30, 1971) is an American actress, best known for her leading role as Dharma on the ABC sitcom Dharma & Greg (1997-2002), for which she won the Golden Globe Award for Best Actress – Television Series Musical or Comedy in 1999, and was nominated for three Primetime Emmy Award for Outstanding Lead Actress in a Comedy Series. Elfman is best known for her performances in television comedies. Her first leading role was in the short-lived ABC sitcom Townies in 1996, before making her film debut in the 1997 comedy Grosse Pointe Blank. Read more on Wikipedia

Since 2007, the English Wikipedia page of Jenna Elfman has received more than 4,348,694 page views. Her biography is available in 30 different languages on Wikipedia making her the 4,799th most popular actor.