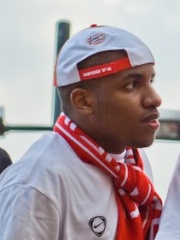 Jefferson Agustín Farfán Guadalupe (Spanish pronunciation: [ˈɟʝefeɾsoɱ faɾˈfan]; born 26 October 1984) is a Peruvian professional footballer who mainly plays as a forward or winger for Alianza Lima and the Peru national football team. Commonly known as Farfán or the nickname Foquita (Spanish for Little Seal), he is known for his speed and technical ability and was one of the best providers of assists during his time in the Bundesliga.Farfán began his career with Deportivo Municipal and Alianza Lima; the latter club saw him make his professional debut in 2001. In 2002, Farfán was highlighted as one of the next best players of Peruvian football and a year later, won his second Primera División title. Read more on Wikipedia

Among SOCCER PLAYERS In Peru