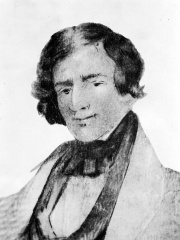 Jedediah Strong Smith (January 6, 1799 – May 27, 1831), was an American clerk, transcontinental pioneer, frontiersman, hunter, trapper, author, cartographer, and explorer of the Rocky Mountains, the North American West, and the Southwest during the early 19th century. After 75 years of obscurity following his death, Smith was rediscovered as the American whose explorations led to the use of the 20-mile (32 km)-wide South Pass as the dominant point of crossing the Continental Divide for pioneers on the Oregon Trail. Coming from a modest family background, Smith traveled to St. Louis and joined William H. Read more on Wikipedia

Since 2007, the English Wikipedia page of Jedediah Smith has received more than 1,118,666 page views. His biography is available in 18 different languages on Wikipedia making him the 168th most popular explorer.

Among EXPLORERS In United States