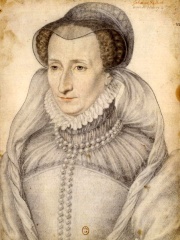 Jeanne d'Albret (Basque: Joana Albretekoa; Occitan: Joana de Labrit; 16 November 1528 – 9 June 1572), also known as Jeanne III, was the queen regnant of Navarre from 1555 to 1572. She married Antoine de Bourbon, Duke of Vendôme, becoming the Duchess of Vendôme and was the mother of Henri de Bourbon, who became King Henry III of Navarre and IV of France, the first Bourbon king of France. Jeanne was the acknowledged spiritual and political leader of the French Huguenot movement, and a key figure in the French Wars of Religion. Read more on Wikipedia

Jeanne d'Albret is most famous for being the mother of Henry IV of France.

Among noblemen, Jeanne d'Albret ranks 58 out of 842. Before her are Princess Alice of the United Kingdom, Robert Guiscard, Philippe II, Duke of Orléans, Elizabeth Charlotte, Madame Palatine, Charles, Count of Valois, and Lady Jane Grey. After her are Archduke Charles, Duke of Teschen, Grand Duchess Maria Nikolaevna of Russia, Camilla, Duchess of Cornwall, Fatma Sultan, Herodias, and Empress Matilda.