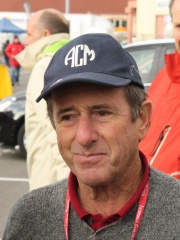 Jean "Jeannot" Ragnotti (born 29 August 1945 in Pernes-les-Fontaines, Vaucluse), is a French former rally driver for Renault in the World Rally Championship. Ranking among his achievements are his conquering of the Monte Carlo Rally in 1981, what was the first turbo victory in the history of the WRC, alongside compatriot Jean-Marc Andrié against the might of the ultimate four-wheel-drive upstart, the Audi Quattro. In the following season, he took his Renault 5 Turbo to victory at the Tour de Corse. Read more on Wikipedia

Since 2007, the English Wikipedia page of Jean Ragnotti has received more than 40,335 page views. Her biography is available in 15 different languages on Wikipedia making her the 260th most popular racing driver.