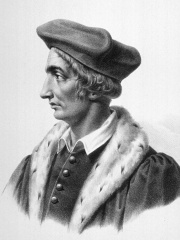 Jean François Fernel (Latinized as Ioannes Fernelius; 1497 – 26 April 1558) was a French physician who introduced the term "physiology" to describe the study of the body's function. He was the first person to describe the spinal canal. Read more on Wikipedia

Among people born in 1497, Jean Fernel ranks 8. Before him are Philip Melanchthon, Beyhan Sultan, Pedro de Valdivia, Emperor Go-Nara, Mōri Motonari, and Ernest I, Duke of Brunswick-Lüneburg. After him are Francesco Canova da Milano and Stephen Gardiner. Among people deceased in 1558, Jean Fernel ranks 11. Before him are Eleanor of Austria, Julius Caesar Scaliger, Clément Janequin, Reginald Pole, Robert Recorde, and Johannes Bugenhagen. After him are Anna van Egmont, Macropedius, Francisco de Sá de Miranda, and Caupolicán.

Among ASTRONOMERS In France