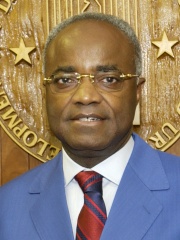 Jean Eyeghé Ndong (born February 12, 1946) is a Gabonese politician. He was the Prime Minister of Gabon from January 20, 2006 to July 17, 2009. He was also the First Vice-President of the Gabonese Democratic Party (PDG) until 2009.Eyeghé Ndong resigned as Prime Minister in July 2009 and announced his intention to stand as an independent candidate in the August 2009 presidential election. Read more on Wikipedia

Since 2007, the English Wikipedia page of Jean Eyeghé Ndong has received more than 10,341 page views. His biography is available in 16 different languages on Wikipedia making him the 13,061st most popular politician.