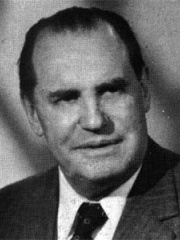 Jean Alexandre Eugène Dieudonné (French: [djødɔne]; 1 July 1906 – 29 November 1992) was a French mathematician, notable for research in abstract algebra, algebraic geometry, and functional analysis, for close involvement with the Nicolas Bourbaki pseudonymous group and the Éléments de géométrie algébrique project of Alexander Grothendieck, and as a historian of mathematics, particularly in the fields of functional analysis and algebraic topology. His work on the classical groups (the book La Géométrie des groupes classiques was published in 1955), and on formal groups, introducing what now are called Dieudonné modules, had a major effect on those fields. He was born and brought up in Lille, with a formative stay in England where he was introduced to algebra. Read more on Wikipedia

Among mathematicians, Jean Dieudonné ranks 312 out of 828. Before him are Pierre François Verhulst, Giambattista Benedetti, Rudolf E. Kálmán, Ivan Vinogradov, Sergei Sobolev, and Kiyosi Itô. After him are Albert Girard, Ostilio Ricci, Raymond Smullyan, Johannes Widmann, Theon of Smyrna, and Eutocius of Ascalon.

Among MATHEMATICIANS In France