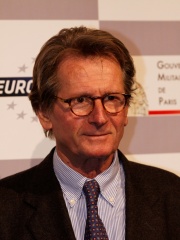 Jean-Pierre Alain Jabouille (born 1 October 1942) is a French former racing driver. He raced in 55 Formula One Grands Prix, collecting two wins during the first years of Renault's turbocharged programme in the late 1970s and early 1980s. Jabouille also raced the 24 Hours of Le Mans from the late 1960s to the early 1990s, driving for Alpine, Matra, Sauber and Peugeot and collecting four 3rd overall finishes in 1973, 1974, 1992 and 1993. Read more on Wikipedia

Among politicians, Jean-Pierre Jabouille ranks 6,531 out of 15,710. Before him are Danilo, Crown Prince of Montenegro, Joseph Darnand, Yevno Azef, Princess Friederike of Hesse-Darmstadt, Otto III, Margrave of Brandenburg, and Aslan Abashidze. After him are Augustinas Voldemaras, Zoltán of Hungary, Maria of Courtenay, Abu Mahdi al-Muhandis, Salitis, and Herbert Pitman.