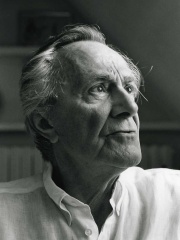 Jean-François Lyotard (UK: ; US: ; French: [ʒɑ̃ fʁɑ̃swa ljɔtaʁ]; 10 August 1924 – 21 April 1998) was a French philosopher, social theorist, and literary theorist. His interdisciplinary discourse spans such topics as epistemology and communication, the human body, modern art and postmodern art, literature and critical theory, music, film, time and memory, space, the city and landscape, the sublime, and the relation between aesthetics and politics. He is best known for his articulation of postmodernism after the late 1970s and the analysis of the impact of postmodernity on the human condition. Read more on Wikipedia

Jean-François Lyotard is most famous for his work in postmodernism. He was a philosopher who was born in France and died in 1998. He was a professor at the University of Paris VIII and the University of California, Irvine. He wrote many books on postmodernism, including The Postmodern Condition: A Report on Knowledge (1979) and The Inhuman: Reflections on Time (1988).

Among philosophers, Jean-François Lyotard ranks 192 out of 1,089. Before him are Karl Kautsky, Anaximenes of Miletus, José Ortega y Gasset, Pierre Teilhard de Chardin, Hans Kelsen, and Xun Kuang. After him are Proclus, Diogenes of Apollonia, Nicolas Malebranche, Giorgio Agamben, Pierre Gassendi, and Apollonius of Tyana.