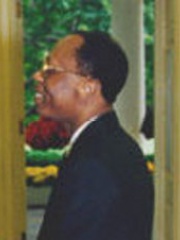 Jean-Bertrand Aristide (born 15 July 1953) is a Haitian former Salesian priest and politician who became Haiti's first democratically elected president. A proponent of liberation theology, Aristide was appointed to a parish in Port-au-Prince in 1982 after completing his studies to become a priest. He became a focal point for the pro-democracy movement first under Jean-Claude "Baby Doc" Duvalier and then under the military transition regime which followed. Read more on Wikipedia

Among politicians, Jean-Bertrand Aristide ranks 7,671 out of 15,710. Before him are Theophylact I, Count of Tusculum, John C. Calhoun, Philipp, Prince of Eulenburg, Trpimir I of Croatia, Lý Thái Tổ, and Djedkare Shemai. After him are Smbat I of Armenia, Lew Sapieha, Frederick Augustus II, Grand Duke of Oldenburg, Beatrice of Swabia, Peire de Montagut, and Ashraf Hotak.

Among POLITICIANS In Haiti