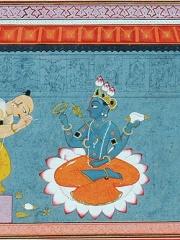 Jayadeva (pronounced [dʑɐjɐˈdeːʋɐ]; Odia: ଜୟଦେବ; born c. 1170 CE), also spelt Jaideva, was a Sanskrit poet during the 12th century. He is most known for his epic poem Gita Govinda which concentrates on Krishna's love with the gopi, Radha, in a rite of spring. This poem, which presents the view that Radha is greater than Krishna, is considered an important text in the Bhakti movement of Hinduism.Little is known of his life, except that he was a loner poet and a Hindu mendicant celebrated for his poetic genius in eastern India. Read more on Wikipedia

Page views of Jayadevas by language

Among religious figures, Jayadeva ranks 983 out of 2,238. Before him are Johann Eck, Augustine of Canterbury, Charles I, Count of Flanders, Ibn Qutaybah, Al-Tabarani, and Isma'il ibn Ja'far. After him are Simeon Stylites the Younger, Euthymius the Great, Benedict the Moor, Adalbert of Magdeburg, Walter Kasper, and Nicanor the Deacon.

Among people born in 1170, Jayadeva ranks 10. Before him are Wolfram von Eschenbach, Walther von der Vogelweide, Constantine Laskaris, Hermann von Salza, Isabella of Hainault, and Muqali. After him are Otto I, Count of Burgundy, Pierre de Castelnau, Al-Afdal ibn Salah ad-Din, Jacques de Vitry, Abdallah al-Adil, and Conrad II, Duke of Swabia. Among people deceased in 1245, Jayadeva ranks 2. Before him is Rusudan of Georgia. After him are Alexander of Hales, Beatrice d'Este, Queen of Hungary, and Ramon Berenguer IV, Count of Provence.