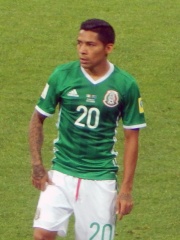 Javier Ignacio Aquino Carmona (Spanish pronunciation: [xaˈβjeɾ aˈkino], born 11 February 1990) is a Mexican professional footballer who plays as a left-back for Liga MX club Tigres UANL. He is an Olympic gold medalist.Aquino made his debut with Cruz Azul in 2010, playing in over 70 league matches until his transfer to Spanish Liga Adelante club Villarreal in January 2013, with whom he gained promotion to La Liga that same season. In 2014, he was loaned out to Rayo Vallecano. After a quiet performance with Rayo Vallecano, in 2015 he returned to Mexico to join Tigres UANL. Aquino has been called up to the Mexico U-23 national team, where he was a part of the squads playing at the 2011 Copa América, the 2011 Pan American Games, and the 2012 Summer Olympics, where Mexico won the gold medal. Read more on Wikipedia