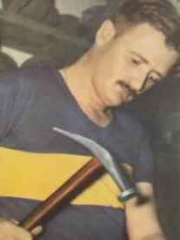 Javier Ambrois Campaña (born May 9, 1932 in Montevideo, Uruguay - died June 25, 1975 in Montevideo, Uruguay) was a Uruguayan footballer who played for clubs of Uruguay, Argentina and Brazil and the Uruguay national football team in the FIFA World Cup Switzerland 1954. He and Humberto Maschio (Argentina), were the all-time top scorers of the 1957 South American Championship, with 9 goals each. Read more on Wikipedia

Since 2007, the English Wikipedia page of Javier Ambrois has received more than 20,306 page views. Her biography is available in 17 different languages on Wikipedia. Javier Ambrois is the 1,557th most popular soccer player.