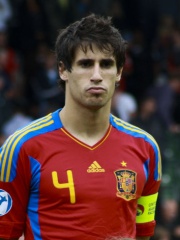 Javier "Javi" Martínez Aginaga (Spanish pronunciation: [xaˈβjeɾ ˈxaβi maɾˈtineθ aɣiˈnaɣa]; born 2 September 1988) is a Spanish footballer who plays for German club Bayern Munich as a defensive midfielder or a central defender. He arrived at Athletic Bilbao in 2006, before his 18th birthday, quickly imposing himself as a starter and going on to appear in 251 official games over the course of six La Liga seasons, scoring 26 goals. Read more on Wikipedia

Since 2007, the English Wikipedia page of Javi Martínez has received more than 1,328,591 page views. His biography is available in 51 different languages on Wikipedia making him the 1,473rd most popular soccer player.