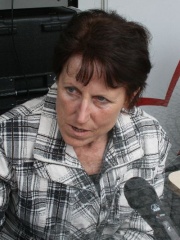 Jarmila Kratochvílová (Czech pronunciation: [ˈjarmɪla ˈkratoxviːlovaː] (listen); born 26 January 1951, in Golčův Jeníkov) is a Czech former track and field athlete. She won the 400 metres and 800 metres at the 1983 World Championships, setting a world record in the 400 m.In 1983, she set the world record for the 800 metres, which still stands and is currently the longest-standing individual world record in athletics. Read more on Wikipedia

Among politicians, Jarmila Kratochvílová ranks 4,723 out of 15,710. Before her are Frederick I, Margrave of Meissen, Wonjong of Goryeo, Aaron Burr, Prince Louis of Battenberg, Princess Christine Louise of Oettingen-Oettingen, and Vaišvilkas. After her are Carausius, John Hawkwood, Leonnatus, Kiril, Prince of Preslav, Ásgeir Ásgeirsson, and Emperor Sushun.