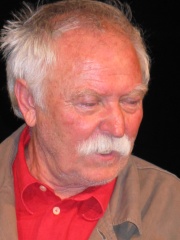 Janosch (German: [ˈjaːnɔʃ] (listen), born as Horst Eckert on March 11, 1931) is one of the best-known German-language children's book authors and illustrators. He was born in Hindenburg (now Zabrze, Poland) in Upper Silesia to a family of mixed German and Polish origin. He said in an interview that he is Silesian of nationality.After World War II, the family fled to West Germany. Read more on Wikipedia

Since 2007, the English Wikipedia page of Janosch has received more than 73,865 page views. His biography is available in 20 different languages on Wikipedia making him the 2,649th most popular writer.

Page views of Janosches by language

Among writers, Janosch ranks 2,645 out of 4,883. Before him are Gysbert Japiks, Hierocles of Alexandria, Carmen Laforet, Paul Fleming, Boris Akunin, and Ram Prasad Bismil. After him are Johan Turi, Walter Map, Richard Wright, Yury Yakovlev, Eduard Vilde, and Imre Madách.