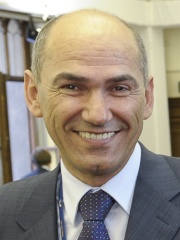 Ivan Janša (Slovene: [ˈíːʋan ˈjàːnʃa]; born 17 September 1958), baptized and best known as Janez Janša (Slovene: [ˈjàːnɛs]), is a Slovenian politician who is currently serving as prime minister of Slovenia, a position he had previously also held from 2004 to 2008, and from 2012 to 2013. Janša has led the Slovenian Democratic Party, which has emerged as the pre-eminent Slovenian right-wing party, since 1993.Janša served as Minister of Defence from 1990 to 1994, a post he had also held during the Slovenian War of Independence. Janša served as prime minister from 2004 to 2008, and again became prime minister in 2012, following an early election in December 2011. Read more on Wikipedia

Among politicians, Janez Janša ranks 4,425 out of 15,710. Before him are Carmen Franco, 1st Duchess of Franco, Shiban, Imi Lichtenfeld, Emperor Ai of Han, Gajah Mada, and Ivaylo of Bulgaria. After him are Ahilyabai Holkar, Pedro Pires, Mao Anying, Fruela II of Asturias, Vsevolod the Big Nest, and Brigitte Bierlein.