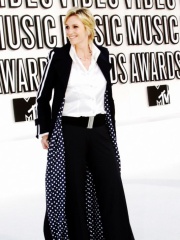 Jane Marie Lynch (born July 14, 1960) is an American actress, singer and author. She is known for starring as Sue Sylvester in the musical comedy series Glee (2009–2015), which earned her a Primetime Emmy Award. Lynch also gained recognition for her roles in Christopher Guest's mockumentary films, such as Best in Show (2000), A Mighty Wind (2003) and For Your Consideration (2006).Lynch had a recurring role in the sitcom Two and a Half Men (2004–2014), for which she received a nomination for a Primetime Emmy Award, as well as recurring roles in the drama series The L Word (2005–2009), the police drama series Criminal Minds (2006–2020), the drama series The Good Fight (2017–present), and the period comedy series The Marvelous Mrs. Read more on Wikipedia