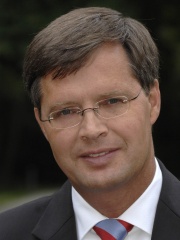 Jan Pieter "Jan Peter" Balkenende Jr. KmstkNO CSG (Dutch pronunciation: [ˈjɑn ˈpeːtər ˈbɑlkənˌɛndə] (listen); born 7 May 1956) is a retired Dutch politician of the Christian Democratic Appeal (CDA) party and jurist who served as Prime Minister of the Netherlands from 22 July 2002 to 14 October 2010. Balkenende studied History and Law at the Free University Amsterdam obtaining Master of Arts and law degrees and worked as a legal counsel for the academic council of his alma mater before finishing his thesis and graduated as a PhD in governmental studies and worked as a professor of Christian theology at his alma mater from April 1993 until May 2002. Read more on Wikipedia

Since 2007, the English Wikipedia page of Jan Peter Balkenende has received more than 245,354 page views. His biography is available in 60 different languages on Wikipedia making him the 6,811th most popular politician.