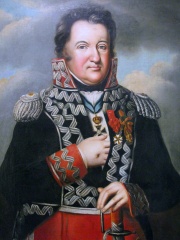 Jan Henryk Dąbrowski (Polish pronunciation: [ˈjan ˈxɛnrɨɡ dɔmˈbrɔfskʲi]; also known as Johann Heinrich Dąbrowski (Dombrowski) in German and Jean Henri Dombrowski in French; 29 August 1755 – 6 June 1818) was a Polish general and statesman, widely respected after his death for his patriotic attitude, and described as a national hero.Dąbrowski initially served in the Saxon Army and joined the Polish–Lithuanian Commonwealth Army in 1792, shortly before the Second Partition of Poland. He was promoted to the rank of general in the Kościuszko Uprising of 1794. After the final Third Partition of Poland, which ended the existence of Poland as an independent country, he became actively involved in promoting the cause of Polish independence abroad. Read more on Wikipedia

Jan Henryk Dąbrowski was a Polish psychiatrist who developed a theory of personality development that he called the Theory of Positive Disintegration. The theory is based on the idea that it is necessary for a person to go through a process of disintegration in order to create a new, more mature personality.