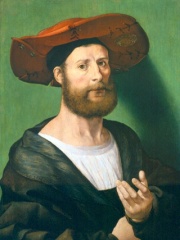 Jan Gossaert (c. 1478 – 1 October 1532) was a French-speaking painter from the Low Countries also known as Jan Mabuse (the name he adopted from his birthplace, Maubeuge) or Jennyn van Hennegouwe (Hainaut), as he called himself when he matriculated in the Guild of Saint Luke, at Antwerp, in 1503. He was one of the first painters of Dutch and Flemish Renaissance painting to visit Italy and Rome, which he did in 1508–09, and a leader of the style known as Romanism, which brought elements of Italian Renaissance painting to the north, sometimes with a rather awkward effect. Read more on Wikipedia

Jan Gossaert is most famous for his painting, "The Adoration of the Kings."

Among people born in 1478, Jan Gossaert ranks 9. Before him are Pope Clement VII, Hayreddin Barbarossa, Philip I of Castile, Giorgione, Baldassare Castiglione, and John, Prince of Asturias. After him are Pánfilo de Narváez, Hatuey, Surdas, Barbara Jagiellon, Sancha of Aragon, and Gian Giorgio Trissino. Among people deceased in 1532, Jan Gossaert ranks 2. Before him is Muhammad XII of Granada. After him are Bernardino Luini, John, Elector of Saxony, Piri Mehmed Pasha, Louis II, Count Palatine of Zweibrücken, Jaime, Duke of Braganza, Henry the Middle, Duke of Brunswick-Lüneburg, Tullio Lombardo, and William Warham.