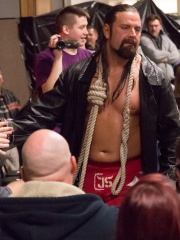 James Allen Cox (born June 1, 1977) is an American professional wrestler better known by the ring name James Storm. He is signed with the National Wrestling Alliance (NWA), where he is currently one half of the NWA World Tag Team Champions.He is best known for his time with Impact Wrestling (formerly Total Nonstop Action Wrestling, TNA). During his time with Impact Wrestling, Storm became a one-time TNA World Heavyweight Champion, one-time TNA King of the Mountain Champion, a record eight time NWA World Tag Team Champion (seven times with Chris Harris, and once with Eli Drake), and a record seven-time TNA World Tag Team Champion (five times with Bobby Roode, once each with Gunner, and once each with Abyss). Read more on Wikipedia

Since 2007, the English Wikipedia page of James Storm has received more than 1,629,301 page views. His biography is available in 16 different languages on Wikipedia making him the 460th most popular wrestler.