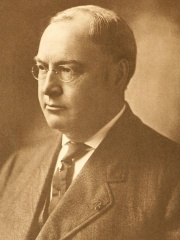 James Schoolcraft Sherman (October 24, 1855 – October 30, 1912) was an American politician who was a United States representative from New York from 1887 to 1891 and 1893 to 1909, and the 27th vice president of the United States under President William Howard Taft from 1909 until his death in 1912. He was a member of the interrelated Baldwin, Hoar, and Sherman families, prominent lawyers and politicians of New England and New York. Although not a high-powered administrator, he made a natural congressional committee chairman, and his genial personality eased the workings of the House, so that he was known as 'Sunny Jim'. Read more on Wikipedia

Among politicians, James S. Sherman ranks 8,737 out of 15,577. Before him are Princess Dorothea Charlotte of Brandenburg-Ansbach, Jim Garrison, Étienne Maurice Gérard, Izyaslav of Polotsk, Constantine III of Scotland, and Adolf, Count Palatine of the Rhine. After him are Stefan Stambolov, Ouyang Xun, Horst Sindermann, Margaret I, Countess of Flanders, Bernhard II, Duke of Saxe-Meiningen, and Gottschalk.