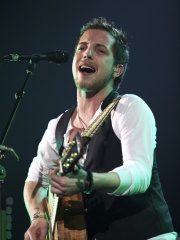 James Morrison Catchpole (born 13 August 1984) is an English singer, songwriter and guitarist from Rugby, Warwickshire. In 2006, his debut single "You Give Me Something" became a hit in Europe, Australia, Japan and Iran, peaking in the top five in the UK and claiming the No. 1 spot in New Zealand. Read more on Wikipedia

Since 2007, the English Wikipedia page of James Morrison has received more than 61,270 page views. His biography is available in 27 different languages on Wikipedia making him the 1,908th most popular singer.

Among singers, James Morrison ranks 1,918 out of 3,001. Before him are Ashlee Simpson, Mai Charoenpura, Alma, JoJo, Florence Welch, and Mark E. Smith. After him are Redman, Wendy, Agnes Carlsson, Guildo Horn, Mario Frangoulis, and Natasha Bedingfield.