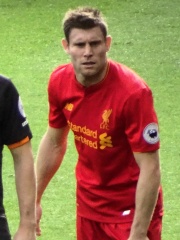 James Philip Milner (born 4 January 1986) is an English professional footballer who plays for Premier League club Liverpool. A versatile player, he has been used in multiple positions, including on the wing, in midfield and at full-back. Milner is Liverpool's vice-captain.Milner's talent in football, cricket, and long-distance running was recognised at a young age. Read more on Wikipedia

Since 2007, the English Wikipedia page of James Milner has received more than 4,915,375 page views. His biography is available in 52 different languages on Wikipedia making him the 1,667th most popular soccer player.