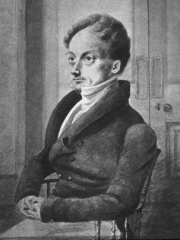 James Mill (born James Milne, 6 April 1773 – 23 June 1836) was a Scottish historian, economist, political theorist, and philosopher. He is counted among the founders of the Ricardian school of economics. He also wrote the monumental work The History of British India. Read more on Wikipedia

Since 2007, the English Wikipedia page of James Mill has received more than 377,831 page views. His biography is available in 39 different languages on Wikipedia making him the 82nd most popular economist.

Among people born in 1773, James Mill ranks 8. Before him are Louis Philippe I, Thomas Young, William Henry Harrison, Robert Brown, Friedrich Mohs, and Ludwig Tieck. After him are Louis I of Etruria, Aimé Bonpland, Thérésa Tallien, Maria Theresa of Austria-Este, Queen of Sardinia, Luisa of Naples and Sicily, and Armand-Augustin-Louis de Caulaincourt. Among people deceased in 1836, James Mill ranks 14. Before him are Maria Malibran, Antoine Laurent de Jussieu, Princess Wilhelmine of Baden, Anthony of Saxony, Davy Crockett, and Claude-Louis Navier. After him are Johann I Joseph, Prince of Liechtenstein, Aaron Burr, Nathan Mayer Rothschild, Anton Reicha, Christiaan Hendrik Persoon, and Maria Cristina of Savoy.