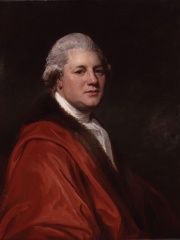 James Macpherson (Gaelic: Seumas MacMhuirich or Seumas Mac a' Phearsain; 27 October 1736 – 17 February 1796) was a Scottish writer, poet, literary collector and politician, known as the "translator" of the Ossian cycle of epic poems. Read more on Wikipedia

Since 2007, the English Wikipedia page of James Macpherson has received more than 168,597 page views. His biography is available in 33 different languages on Wikipedia making him the 2,918th most popular politician.

Among politicians, James Macpherson ranks 2,900 out of 14,801. Before him are Anne Marie d'Orléans, Frederick Augustus II of Saxony, Nancy Pelosi, Joanna of Austria, Grand Duchess of Tuscany, Aspar, and Eleanor of Navarre. After him are Emperor Daizong of Tang, Francesco Cossiga, Argishti I of Urartu, Pekah, Gudrun Burwitz, and Dionysius II of Syracuse.