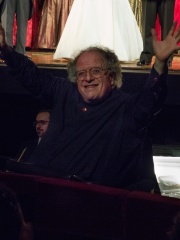 James Lawrence Levine (; June 23, 1943 – March 9, 2021) was an American conductor and pianist. He was music director of the Metropolitan Opera (the "Met") from 1976 to 2016. He was formally terminated from all his positions and affiliations with the Met on March 12, 2018, over sexual misconduct allegations, which he denied.Levine held leadership positions with the Ravinia Festival, the Munich Philharmonic, and the Boston Symphony Orchestra. Read more on Wikipedia

Among CONDUCTORS In United States

Among conductors born in United States, James Levine ranks 3. Before him are Herbert Blomstedt (1927) and John Philip Sousa (1854). After him are Charles Mackerras (1925) and Arthur Fiedler (1894).