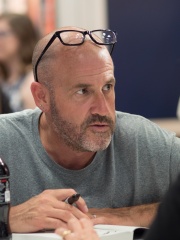 James Frey (born September 12, 1969) is an American writer and businessman. His first two books, A Million Little Pieces (2003) and My Friend Leonard (2005), were bestsellers marketed as memoirs. Large parts of the stories were later found to be exaggerated or fabricated, sparking a media controversy. Read more on Wikipedia

Since 2007, the English Wikipedia page of James Frey has received more than 1,138,882 page views. Her biography is available in 16 different languages on Wikipedia making her the 4,813th most popular writer.