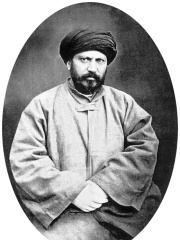 Sayyid Jamāl al-Dīn al-Afghānī (Persian: سید جمال‌‌‌الدین افغانی‎), also known as Sayyid Jamāl ad-Dīn Asadābādī (Persian: سید جمال‌‌‌الدین اسد‌آبادی‎) and commonly known as Al-Afghani (1838/1839 – 9 March 1897), was a political activist and Islamic ideologist who travelled throughout the Muslim world during the late 19th century. He is one of the founders of Islamic Modernism as well as an advocate of Pan-Islamic unity in Europe and Hindu–Muslim unity in India against the British, he has been described as being less interested in minor differences in Islamic jurisprudence than he was in organizing a united response to Western pressure. Read more on Wikipedia

Jamāl al-dīn al-afghānī is most famous for being the founder of the Islamic State of Afghanistan.

Among SOCIAL ACTIVISTS In Afghanistan

Among social activists born in Afghanistan, Jamāl al-Dīn al-Afghānī ranks 1. After him are Meena Keshwar Kamal (1956) and Sonita Alizadeh (1996).